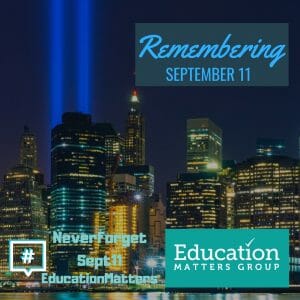 It was probably one of the biggest world disaster events since the turn of the century. September 11 showed the world what horror people can do to others.

On September 11, 2001, at 8:45 a.m. on a clear Tuesday morning, an American Airlines Boeing 767 loaded with 20,000 gallons of jet fuel crashed into the north tower of the World Trade Center in New York City.

Less than 15 minutes after the terrorists struck the nerve center of the U.S. military, the horror in New York took a catastrophic turn when the south tower of the World Trade Center collapsed in a massive cloud of dust and smoke.

The structural steel of the skyscraper, built to withstand winds in excess of 200 miles per hour and a large conventional fire, could not withstand the tremendous heat generated by the burning jet fuel.

At 10:30 a.m., the north building of the twin towers collapsed. Only six people in the World Trade Center towers at the time of their collapse survived. Almost 10,000 others were treated for injuries, many severe.

This event changed the world forever. In the days and months following, security measures would be a massive focus for airlines and for countries.

As far as the UK, we’ve faced our own challenges with attacks of terror. They demonstrated what intolerance and hatred could fuel and do. As a nation and as global citizens, our youth deserve the right to have freedom – in all it’s shapes and sizes! Teaching core values of respect, tolerance and understanding of differences being okay is core to seeing that an event such as this never happens again. Even 17 years on, the scars of this are still ever present – in our airports, in our travel destinations, in our cities, even in some of our schools! Fear and hate should not be central to how our school system is – rather it should be about tolerance, respect, kindness, empathy and ultimately the greatest of all – love. 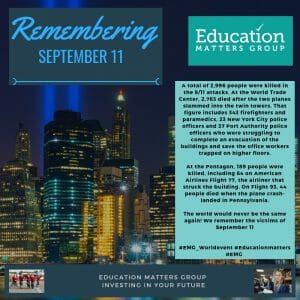